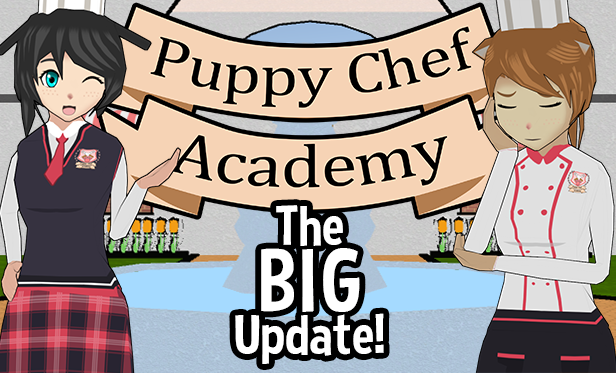 First, I would like to sincerely thank you to each and every one of you who took the time to play the game, share it with your friends, and make videos of you playing. I genuinely appreciate it! Puppy Chef Academy is made for you, and I couldn't be happier to have the opportunity to bring that fun and enjoyment to you.

Now, some of you may have noticed that there's a thread in the game's steam forums that's been continuously updated in tandem with the game's beta channel on Steam. Today, all of the improvements from the beta channel are being merged into the main build for everyone to enjoy! It's a long list of changes, but they have all improved the game in their own way. The list is so long, that I'm going to put the patch notes at the very bottom this time.

Moving on: While reading the changelog, you might notice there's a line that mentions localization support. Is it true? 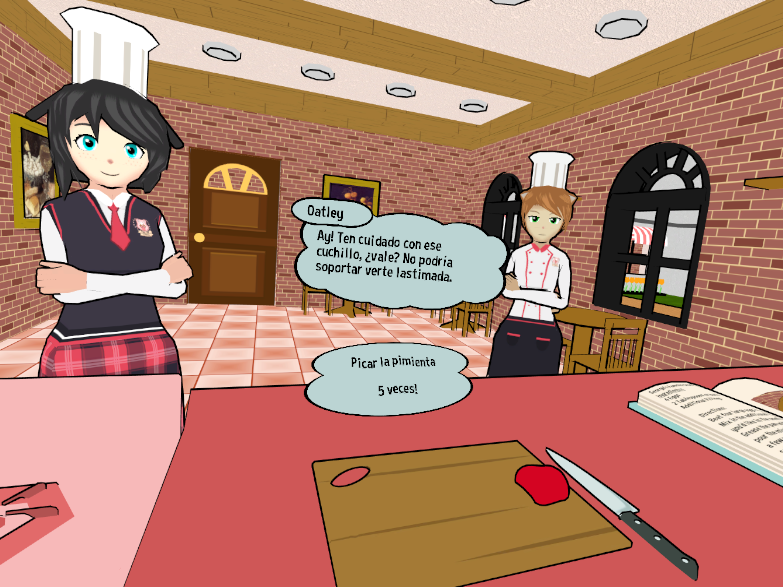 Yep! You can now add user-made localizations to the game. Note that it's still rudimentary and some elements of the game will still be in English, but it's a work-in-progress. There should be an example localization.xml file in the game's files that contains a (very rough) Spanish localization and instructions on how to make and activate a localization. If you or someone you know is interested in localizing the game for your language, let me know and I'll do what I can to help bring the game to your native language!

Now for the big one: The game now has a native Oculus build! You can now launch the game through the native Oculus Home build without ever needing SteamVR. Hooray! A big thank you to the folks at Oculus for allowing me into their Oculus Start program and giving me the opportunity to create a native Oculus build for you all to enjoy.

The native Oculus Home build is nearly identical to the SteamVR build, however, the native Oculus build includes Oculus-specific features and adjusts the gameplay accordingly for Oculus users. These features include pausing the game while the headset is taken off as well as switching the grab button from the front trigger to the grip trigger (as I've been told it's the more natural "grabbing" motion for Oculus users).

To access the native Oculus build, if you purchased the game, simply download the Puppy Chef Academy - Oculus.zip file from itch.io, double click the game's .exe, and you're set!

And that's it! Phew, what an announcement. Again, thank you all so much for playing the game. As usual, if you encounter any problems, please feel free to reach out to me through the contact form on my website, as I'm notified immediately: http://www.theneptune.site/#contact

Until next time, cheers!

Don't forget to check out the other Puppy Chef Academy communities on Reddit, Discord, and more!

Without further ado, here is the big list of changes:

- Updated the game to Unity 5.6.6
- Replaced the old academy model
- Better performance as a result of replacing the academy model
- Fixed some minor typos in the game's dialogue
- Improved loading times
- (Malasadas recipe) Fixed the collision behavior of a fork that would previously get stuck
- (Lasagna recipe) Changed a step to pour ingredients instead of colliding them with the pan to be more consistent with the rest of the game's mechanics.
- (Lasagna recipe) Fixed the haptics and appearance of the players hand when interacting with a fork during the first mixing step
- (Lasagna recipe) Reduced time required to cook beef in the pan from 12 seconds to 6 seconds
- (Lasagna recipe) Changed one of the pouring step's instructions to match the current step
- (All recipes) Fixed the bowls so if you crack an egg inside of one, the egg will affix itself into the bowl as intended
- Improved hand animations: Hands will now animate when pressing the trigger, grip button (or grip trigger on Oculus Touch), and touch pad (or joystick on Oculus Touch)
- Changed advance text button to fill when the trigger is pressed, not touched. This keeps users using Oculus Touch from accidentally triggering the advance dialogue button.
- Replaced lower-resolution splash logo with high-resolution logo
- Fixed the post-miso recipe scenes where the dorm building wall used to overlap Oatley's dorm window
- Fixed an issue where the player's hands would not appear for some users
- Fixed(?) an issue where the pointer beam would occasionally disappear at the start of certain scenes
- Replaced stove model with new model, increasing performance as a result
- Reduced poly count for light fixtures found in the kitchen, further resulting in better performance
- Moved the settings screen from the TV behind the player to a laptop on the desk. You can access these settings by lifting the laptops's lid. This should help users with only front-facing setups.
- Updated the academy model once more. The model uses fewer materials, resulting in fewer draw calls and better performance
- Changed the behavior of the fridge doors, cabinet doors, and drawers so they are no longer beholden to Unity's unpredictable physics system. They will remain stationary until they're interacted with. This way, they no longer open, freak out, explode, or fling objects around at completely random intervals.
- Tweaked the teleporters in one of the end scenes for the pizza episode so that the player does not have to turn completely around to complete the scene. This should also help front-facing users.
- By (un)popular demand, you can now play Wacky Bear Game in your dorm after finishing the Crepes episode.
- Fixed an issue where some characters were placed lower than they should have been during certain scenes.
- Added a prop to the room which appears after finishing the Curry episode
- Fixed an issue where eggs would not crack open
- Added rudimentary localization support. Check (your game path)\Puppy Chef Academy_Data\StreamingAssets\LocalizationText.xml for more information on how to change the game's language. The only translation so far is in Spanish which only includes the title screen and the omelette recipe. The translation uses a combination of first-year college Spanish knowledge and google translate as a proof-of-concept. If you'd like to offer a translation in your language, please contact me via my website at http://theneptune.site/#contact

A cooking game made for Virtual Reality